The Bad, Ugly and Horrible of China – All for the Good

The most amazing phlegmming, snotting, spitting, hawking place on the face of the earth and anywhere to deposit it is fine – restaurant, train floor, next to your foot, anywhere!

The men are pigs at best and have this brashness and complete lack of consideration to others that almost seems like it really takes effort.

People push in, invade your space, make fun of you (in front of you), make you feel truly alien, stare unashamedly and just generally treat you in anyway they seem is okay (which is anything they want).

So why the hell would I come here, now for my fourth time… and love it!

All the above fascists, traits and ways of doing are purely cultural. While I can see them as rude and inconsiderate it is purely through my tainted European cultured eyes (white-European-Australian as I know my Indigenous brothers would not care half as much as me).

I love being in this planet (China) where almost everything is contradictory to the environment I was raised. It really makes me have to concentrate on the less attractive sides as ‘cultural’ and embrace them (will probably love a spit in the street myself after a week).

The sides of the culture that are remarkable and endearing completely over ride the not so appealing ones. Example you get treated with intrigue and interest as though they are looking at someone who has truly come from a different planet. You get privileged and honoured in ridiculous ways for being a foreigner – one weekend I was invited to a wedding by a stranger who took me out to his cousin’s wedding in the countryside and was the honoured guest for the weekend. A bit scary and felt bad about accepting but know I was his prize for the weekend and the good comes with the interesting!

Let you know about China part 2 – my first Chinese wedding in the mountains of Hunan province!

The very PUBLIC toilets of China (yep - no doors)

Chinese barber - accidentally got my hair cut by a prostitute once in Beijing and probably had less diseases than this guy's scissors - still can't beat $1.40 for a hair cut! 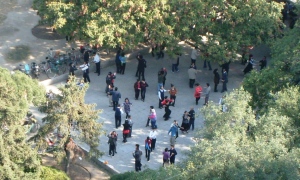 Dancing in the streets - morning, day and night!

Experiences are the richest thing in life. Love them and live them.
View all posts by Living Geo d'Arcy →
This entry was posted in 2011 Life, 2011 Nomad Adventure. Bookmark the permalink.

4 Responses to The Bad, Ugly and Horrible of China – All for the Good