(Note. I wrote this two weeks ago and I don’t have any picture to accompany as too dangerous if I get spotted…)

It is with a heavy heart I go to sleep tonight thinking about the multitude of people who have no roof over their head and with a forecast of a downpour.

In the two months I have been in South Sudan and Juba I have walked through and around a shanty town near where I live and work in the heart of the city. The settlement is made up of very simple dwellings constructed from canvas, tarpaulins, sticks, mud, corrugated iron, plastic or anything that might be sourced around the place and put to use.

Something like this, but this photo is taken in the Protection of Civilians (PoC) camp on the outskirts of Juba

The settlement could be depressing for some as there is no electricity, running water, sanitation, etc but the people were full of resilience and resourcefulness which I admire but don’t wish upon them or anyone. I found it an inspiring contrast to the big government buildings, corporate businesses and other faceless institutes surrounding it.

It was also the place I did the majority of my shopping contributing directly to their pockets and not the pockets of investors and business managers of the expensive foreign supermarket nearby. I ate here for lunch, I got my take away beans and chapatti (known as commando dinner – simple, filling and cheap) and most of all it was where I had conversations with the people of South Sudan and those who had come from difficult circumstances in Uganda, Eritrea, Ethiopia and Somalia. I learn more about South Sudan from this settlement than anywhere else in the country and certainly more than in the halls of Ministry buildings and UN institutes – not saying the UN is not doing a great job here (I would hate to think what would happen if we weren’t here) but that it is a life very different to the average citizen of this country.

I would walk through the settlement waving to familiar faces, shaking hands with those I had spoken to before, get smiles and waves from excited but polite children. It was not the kind of place most kawaja (foreigner) would walk let alone get to know.

Today as walked around the edge of the settlement I noticed a house that seemed to have been destroyed by a storm or an earthquake or some strange event or act. Then the next house was flattened, and the next. I looked over the settlement and I could see the other side for the first time from this point because EVERY dwelling, shop, restaurant, anything previously standing was completely destroyed. It was like looking over a natural disaster but completely planned and carried out by man (or in this case government).

As I then took my usual path through the settlement just as a few drops of rain were falling with big dark clouds above promising a heavy downpour sooner than later. It was an armageddon-like scene and feeling of sorrow and darkness.

As I saw familiar faces and greeted them I had to hold back emotions knowing what they were facing that night and beyond. But they were unbelievable practical and pragmatic about what they had faced and now had to endure ahead. The lady from the tin shed (restaurant) who fed me many beans and greens for lunch put on a smile and said ‘this is South Sudan’. The young man who I buy my bread from said ‘we’ll see what happens tomorrow’.

For me I will need to find a new place to do my shopping, for them they will have to start life over again with nothing.

Yes, it is an illegal settlement and when I first saw it I thought it was the strangest thing I’d seen next door to the government heart of the city but I can’t believe someone can inflict such immediate purposeful destruction on people who has so little to begin with and now have nothing.

There are no actions we can take, there is nothing a petition, donations or goodwill can do. I feel I have to be as matter-of-fact about it as the people are but I just can’t wipe the incredible sadness in my heart as I sit and write this in a safe and comfortable room while so many have no home or previous their life tonight. 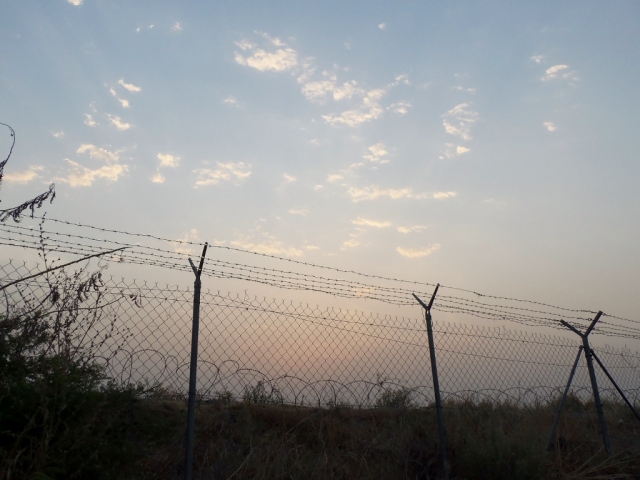 Experiences are the richest thing in life. Love them and live them.
View all posts by Living Geo d'Arcy →
This entry was posted in 2015 Life, South Sudan and tagged equality, fairness, freedom, justice, resilience, resourcefulness, South Sudan, unnatural disaster. Bookmark the permalink.

3 Responses to An Unnatural Disaster