The Far Edge of Humanity

Today I stood on the far edge of humanity and it was beyond what 90% of us in the world would think is possible let alone acceptable (inside or outside of war).

The reason I knew I was still within the realms of humanity was because of the beautiful people. The line for acceptable conditions for humans I had stepped over long before getting here to the Protection of Civilians (PoC) camp in Bentiu, Unity State and feel like I stepped over that line the day I arrived in South Sudan.

As Gabriel, my UNICEF national colleague, and I walked around the PoC camps today we encountered scene after scene of people living in conditions with serious threat to health, security and certainly happiness. Some people exhausted, others hungry, others eating, bathing, drinking and existing in the most unhygienic disease-riddled conditions possible. If it was just one family as I have seen in similar conditions in impoverished rural areas of the globe the weight if the experience is life-lasting but to see 70,000 people living in such conditions could be life-lasting for anyone just reading this. 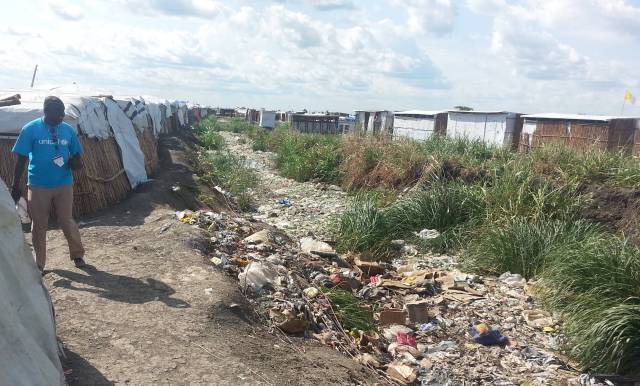 But I am not here to give people a sob story or guilt trip because that does no favours to the fellow humans I am representing from today, instead just think of it as the reality for these people. I will get onto what we might be able to do about it later.

From PoC to PoC camp I walked with Gabriel wading through knee high muck that would be too flattering to call mud. I had been in the PoC each day this week but this was the first time since a big rain yesterday which had delayed my flight back to Juba by two days. The place that was beyond my previous experiences of extreme poverty in the previous days was now amplified to a place I’d never imagined.

The hardest moment came when Gabriel and I stood near the registration tent where people were waiting to get registered so they could then receive food rations, temporary shelter, immunisation and water. I saw people sitting in the middle of the mud barely knowing they were in mud because they were exhausted and starving. The babies and small children were too upset and deprived of energy to keep the flies off their faces. Their mothers clutched onto tiny strips of paper that had a scribbled number so they would enter into the system which was only just a tiny step beyond what they had now which looked like less than nothing. The volume of people made it obvious that not everyone would be registered today and many probably not tomorrow.

I’ve never felt more white and more hopeless in my life. The only thing separating me from any one of these people was my birthplace and there was little I could do immediately to all of my human sisters and brothers sitting in the mud.

These are people who did not choose to be in this situation like everyone else I’ve ever met living in extreme poverty. They are caught in an ongoing civil war on top of extreme poverty that existed before any conflict. They walked extremely long distances in the slim chance to get a little peace and survival. These are the people we should do anything for regardless of what country we are from, how poor we think we are or how critical we are of those we don’t know and maybe don’t want to understand.

So to move on to the rays of hope that I always try to find in any situation and that I am clinging onto now to make this experience not one of sadness and helplessness but one of resolve, learning and inspiration…

Here are the people, ideas, situations and cooperation that I have seen in the past few days that is making a difference and will hopefully win out overall in this situation:

So on this emotional roller-coaster ride of a day which I am thankful to have laid on the couch and got off my chest with this blog. I still believe there is more good than bad out there and humans are resilient, tough, collaborative and inspiring in essence. We just have to make sure we actively think, feel and act on the side of good for it to prevail.

If you do want to think, feel and act on the side of good here are a couple of tips:

3 Responses to The Far Edge of Humanity